The 2017 All-Star Game will be played somewhere other than Charlotte next February, relocated in keeping with the NBA’s stance on a controversial state law it believes discriminates against members of the LGBT community, the league announced Thursday.

In its statement, the league hopes to reschedule All-Star Weekend in Charlotte in 2019, presumably after some changes in or a repeal of North Carolina’s House Bill 2, commonly referred to as the “bathroom law.”

“Since March, when North Carolina enacted HB2 and the issue of legal protections for the LGBT community in Charlotte became prominent, the NBA and the Charlotte Hornets have been working diligently to foster constructive dialogue and try to effect positive change,” the league’s statement read.

“We have been guided in these discussions by the long-standing core values of our league. These include not only diversity, inclusion, fairness and respect for others but also the willingness to listen and consider opposing points of view.”

A new location for the event and all the surrounding festivities will be announced in the coming weeks, the NBA said. Cities that were rumored almost immediately as destinations included New Orleans and Orlando.

As framed by opponents of the law, it discriminates against people who would use public restrooms and locker rooms based on their self-defined gender identity. HB2, written and passed to counter a specific policy in Charlotte supporting such use of facilities, requires people to use public restrooms and locker rooms corresponding to their biological gender. Supporters of HB2 cite privacy and safety concerns.

Gov. Pat McCrory released a statement in response to the NBA’s decision read in part:

“The sports and entertainment elite, Attorney General Roy Cooper and the liberal media have for months misrepresented our laws and maligned the people of North Carolina simply because most people believe boys and girls should be able to use school bathrooms, locker rooms and showers without the opposite sex present.

“Twenty-one other states have joined North Carolina to challenge the federal overreach by the Obama administration mandating their bathroom policies in all businesses and schools instead of allowing accommodations for unique circumstances. Left-wing special interest groups have no moral authority to try and intimidate the large majority of American parents who agree in common-sense bathroom and shower privacy for our children.”

When NBA commissioner Adam Silver first addressed the issue in April, he said he hoped to negotiate a solution with business and political leaders in North Carolina. Before Game 1 of the Finals on June 2, Silver spoke of the lack of progress in working behind the scenes and noted that a short-session of the North Carolina legislature had not modified the law to the league’s satisfaction. He said the NBA would need to decide by the end of summer to allow sufficient time for an alternative market to be vetted and contracted.

Last week after the annual summer Board of Governors meeting in Las Vegas, Silver suggested that HB2 was problematic for more than its decrees on bathroom use and not necessarily identical to laws in other states with potential All-Star host sites.

He also seemed to make a distinction between the 2017 All-Star Game and its surrounding events, and the ongoing operation of an NBA franchise in Charlotte. All-Star Weekend, in particular, involves much more than the Game itself, is spread across multiple days and utilizes venues beyond Time Warner Cable Arena.

“The question for us becomes in this situation,” Silver said last week, “given the controversy, given the amount of discussion, given how hardened the views are there, is this the place we should be in February 2017 as the epicenter of global basketball, where we can go and celebrate our game and our values?”

The Hornets released a statement optimistic that it would host the 2019 Game and events. It read in part:

“We understand the NBA’s decision and the challenges around holding the NBA All-Star Game in Charlotte this season. There was an exhaustive effort from all parties to keep the event in Charlotte, and we are disappointed we were unable to do so. With that said, we are pleased that the NBA opened the door for Charlotte to host All-Star Weekend again as soon as an opportunity was available in 2019.”

“At Turner, and our parent company Time Warner, diversity in all its forms is core to our value system and to the success of our company. Laws to the contrary go against our fundamental belief of equality and inclusion for all individuals. We fully support the NBA’s decision to relocate the 2017 All-Star Game and all of the weekend’s events originally scheduled to be held in Charlotte, North Carolina.

“The annual All-Star Game and accompanying weekend competitions are viewed by millions of fans every year on TNT and we look forward to working with the league to once again produce a memorable and entertaining event.”

Others in or around the NBA expressed views on the issue via social media, particularly if they agreed with the decision: 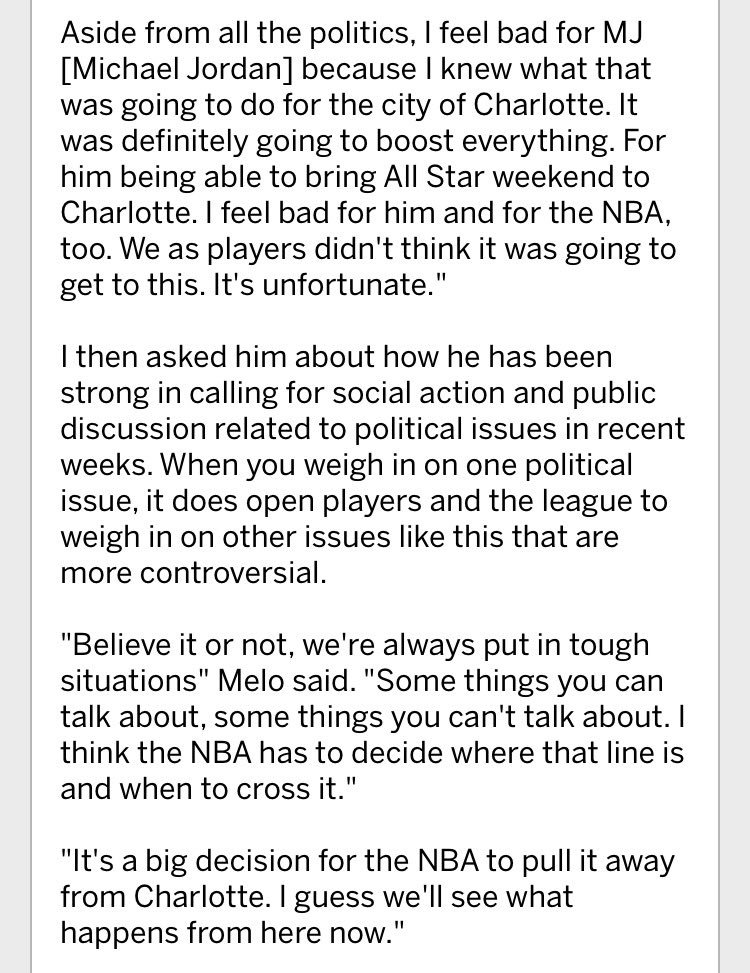 We support Commissioner Silver and are proud of @NBA‘s stand for inclusion and respect. https://twitter.com/SacramentoKings/status/756242105710809088 …

Gregg Popovich on NBA moving All-Star Game from Charlotte: “I agree with the league and Bruce Springsteen and everybody else who pulled out”

Steve Aschburner has written about the NBA since 1980. You can e-mail himhere and follow him on Twitter.

The views on this page do not necessarily reflect the views of the NBA, its clubs or Turner Broadcasting.