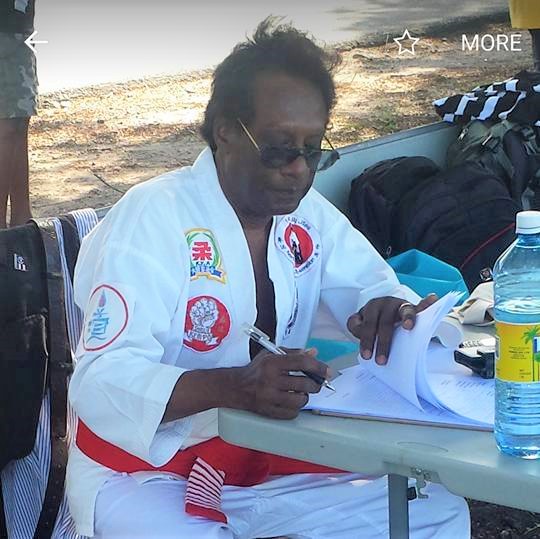 The local sport fraternity has plunged into mourning following news of the passing of 10th Dan Grandmaster, Dr. Stephen Monasingh. The phenomenal Guyanese, who was not enjoying the best of health recently, died on April 27, aged 67.

Dr. Monasingh racked up over 50 years of training, study, and teaching of Martial Arts. The Grandmaster, who has a Doctorate in Oriental Medicine and practice, has been recognised internationally.

He was given Grandmaster status for his development of the style, Shin Kaido, which is a form that includes the best workable techniques of several Martial Arts forms that he studied and practiced, including Taekwondo, Karate and Aikido.

Popular television host, Max Massiah, who only this year honoured Dr. Monasingh on his weekly show Maximum Sports, Combat and Strength, reflected on the life of a good friend he was only able to meet approximately two years ago.

Massiah told News Room Sport that after their first interaction in 2015 when the renowned Silver Fox came to Guyana, himself and Dr. Monasingh developed “an unusual relationship.”

“There was a spiritual connection. When we first met, he said ‘I know you; I watch your programme every week.’ I was amazed to learn that we share the same birthday as well, January 7. From then on we had some deep spiritual conversations and from time to time we would train at his home,” Massiah pointed out.

Massiah said he could not control his emotions when he received the news of Dr. Monasingh’s passing, as they had developed a very close friendship, one built on mutual respect and connected by a sport they both loved.

Massiah asserted that the move to honour Dr. Monasingh earlier this year was deliberate, as he is of the firm belief that sporting heroes should be recognised and pampered when they’re still alive.

“I’m happy that I did that when he was still alive,” Massiah said.

Jeffrey Wong, the 6th Dan Black Belt and Vice-Chairman/Instructor at the Guyana Karate College, hailed Dr. Monasingh as someone who made an immense contribution to Martial Arts.

Sensei Wong said the fraternity is deeply saddened by the loss of a great servant, and the Guyana Karate College and its Chairman, 9th Dan Black Belt Master Frank Woon-A-Tai, would like to extend sincere condolences to Dr. Monasingh’s family.

Soke/Hanshi Dr. Nazim Yassim of the Guyana International Kyokushinkai Martial Arts Academy said he was able to benefit tremendously from the knowledge and expertise of Dr. Monasingh.

“After returning from Suriname where I was training in Kyokushin, Dr. Monasingh helped me to see teaching in a different way; not just about doing it brutally, but about understanding the students and their strengths and weaknesses,” Soke/Hanshi Dr. Nazim Yassim reflected.

During the 60’s and 80’s, Dr. Monasingh was Guyana’s representative on the International Karate Organisation based in Japan. For a number of years, he headed that organisation in Guyana and was also Vice-Chairman of the South American chapter of that organisation.

“He made a great effort to popularise Kyokushin in Guyana,” Soke/Hanshi Dr. Nazim Yassim stated.